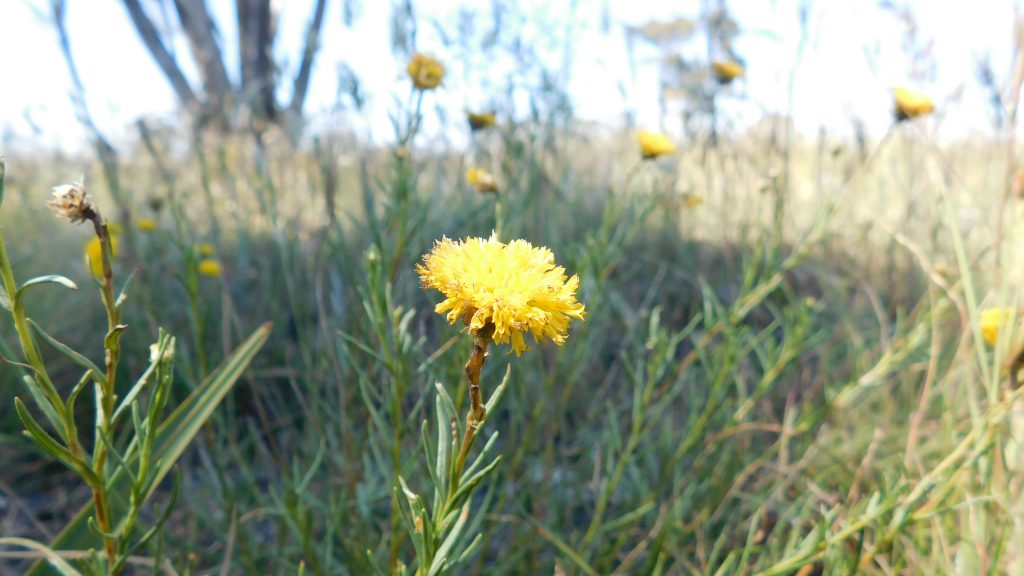 Have you seen one of these amazing yellow flowers?

These are the Endangered Button Wrinklewort. They are found on the equally endangered Victorian Volcanic Plains grassland areas.

What is a Button Wrinklewort?

One of the best named Australian plants, the Button Wrinklewort is a perennial daisy, found in only a few public land sites in Western Victoria, and several isolated sites in NSW and the ACT.

It flowers anytime between October and February, where it produces yellow spherical flower heads 8-15 mm in diameter at the end of long flowering stems.

These stems die back over late Summer to Autumn and are replaced by a new basal rosette of leaves in early Winter.

Roadsides burning by local CFA brigades in Western Victoria has been essential for conserving endangered plants on the VVP.

Many of these species are vulnerable to stock grazing and can no longer be found on private land. However, regular burning by the brigades has been the ideal form of management to maintain biodiversity.

The Wickliffe CFA brigade have been burning the roadsides annually over the Summer months since the middle of last century.

As a result, some of the most pristine remnants of the Natural Temperate Grasslands of the VVP, of which less than 1% remain, occur on roadsides in the Wickliffe area. While regular burning has been essential for conserving endangered grasslands, they also provide strategic fire breaks for communities.

With continued active management of these important roadsides we can keep the Button Wrinklewort and our native grasslands happy and healthy.  Glenelg Hopkins CMA, together with Ararat Rural City Council and the Wickliffe CFA brigade, are working together to protect native grasslands on roadsides.

Genetic rescue of the Button Wrinklewort … one leaf at a time

Railway sidings and DNA testing are assets in the quest to support one the Button Wrinklewort.

In winter 2019, a team including botanists, recovery project team members and site supervisors, visited the few remaining populations of the Button Wrinklewort to collect leaf samples for genetic testing purposes that will also provide insight into population trajectories.

In total, 13 sites were visited and searched for these elusive plants. At each site, 20 plants were tagged and mapped, noting down nearest neighbours and an estimate of population size. Leaf samples were taken from tagged plants, which will be sent to Diversity Arrays Technology for DNA extraction. DNA data will then be analysed by Monash University PhD candidate Yael Rodger. 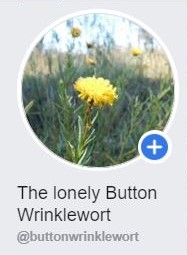 In November 2019, an individual Button Wrinklewort plant was found in a previously unknown location. It was very exciting for the recovery team, who had thought all populations of this endangered plant had been identified. However, being a solitary plant, it needed some assistance with pollination to promote the one plant to become many plants.

This process includes manually pollinating the flowers of the individual Button Wrinklewort Plant – and this many need to occur many times over the flowering period, and for many years to encourage additional plant growth.

In December 2019, the VVP recovery team had completed their manual pollination attempts and bagged the flower heads of the Button Wrinklewort plant at the Caramut site in the hope of collecting some viable seed. As an insurance policy, the flowers of plants at the Wickcliffe Cemetery site were also bagged to collect seed.

In March 2020 the VVP recovery team were very excited then the seeds germinated. In total, 370 seedlings sprouted from the seeds collected – including 12 individuals from the solitary Button Wrinklewort plant.

In November 2020, some of these seedlings from the Wickliffe seed were planted out into an established population near Beaufort to diversify the genetics of that population. A new Button Wrinklewort population was also established on a railway siding near Dunkeld.

In February 2021 seed from the 5 remnant sites on V/Line rail side land – Dobie Bridge, Middle Creek 1, 2 and 3, and Bannockburn Rail reserve – was collected with the completion of the flowering season for the plant.

The plants at the railside locations, and those at the Rokewood Cemetery and Wickliffe Cemetery, had flowerheads bagged in December 2020 meaning seed was collected from 7 remnant tetraploid populations.

A subset of seed from each population will be sent to the Royal Botanic Gardens Conservation Seedbank for cleaning, seed viability testing and storage. This is a requirement of the Australian Government’s National Landcare Program funding, which stipulates all funded threatened flora species are represented in one of the 9 national seedbanks by the end of the program.

The remaining seed will be forwarded to David Franklin at his Grassland Flora nursery, where the seed will be grown out for project use.

Seedlings grown by David will be used to augment existing remnant populations, bolster other restored sites, or create a new site. This planting activity will all be completed following guidelines established by the Arthur Rylah Institute in the monitoring and planting protocol for the Butten Wrinklewort.

The collection process is a relatively easy one, the team simply cut off the bags containing the seed from plants. A much easier process than placing the bags over the flowers, which was completed in late December 2020 in unseasonably cold and wet conditions.

This project is supported by Glenelg Hopkins CMA, through funding from the
Australian Government’s National Landcare Program.