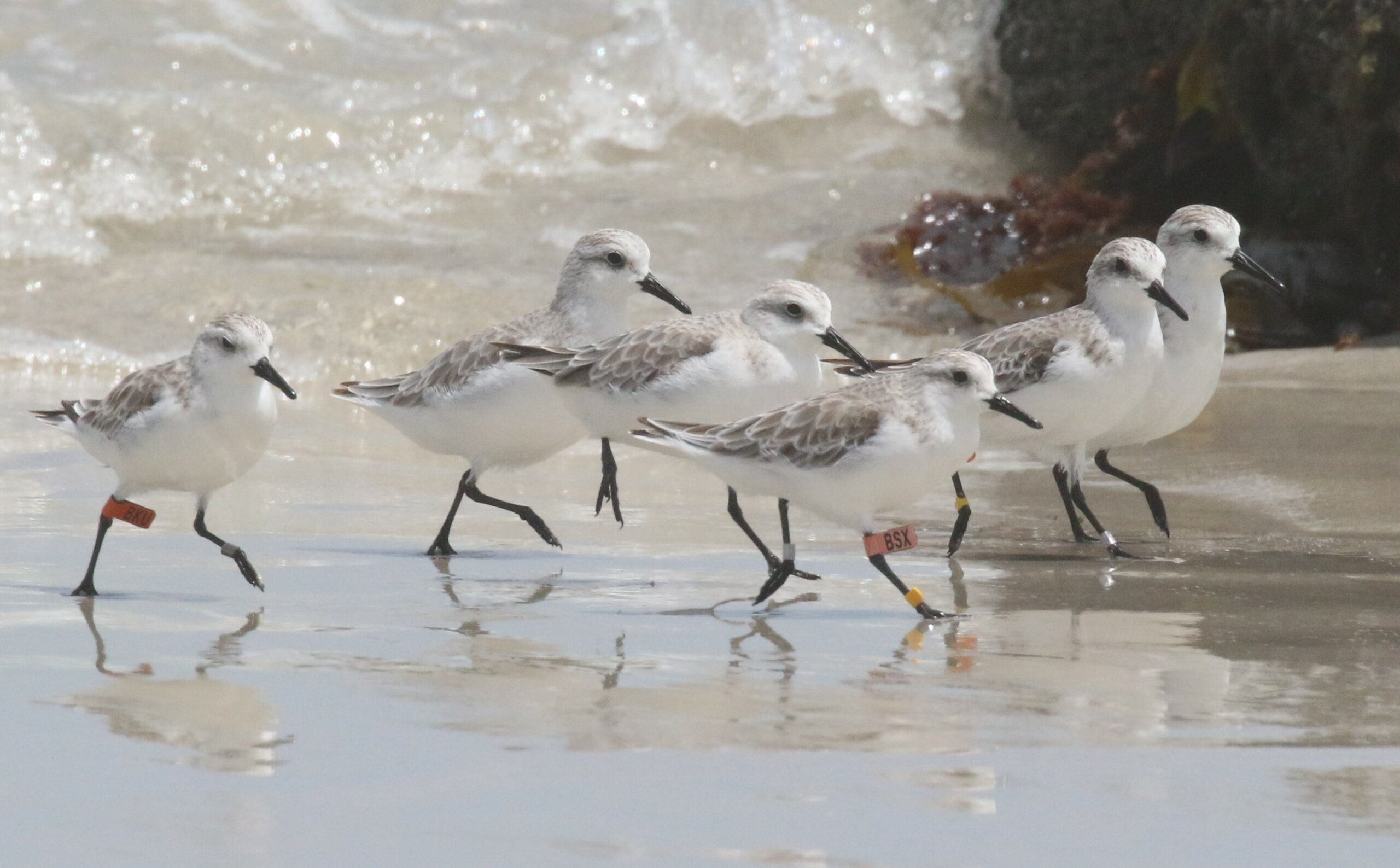 Tracking the path of the Sanderling around the globe

These globetrotting beach birds arrive on our beaches every year in their thousands from the Arctic. This project has community researchers trying to track how these tiny birds, weighing less than 50 grams, make it around the globe every year.

What is the project?

This project is a community-initiated project to identify the habits of the Sanderling birds who arrive on the southern shores of Australia each Summer and focusses on the Discovery Bay area of south-west Victoria, and the beaches of south-east South Australia.

Shorebirds the world over are in decline, and migratory species using the East Asian-Australasian Flyway (EAAF) including the Sanderling (Calidris alba) are of foremost conservation concern. The putative reasons for dramatic population declines across the EAAF are diverse and include: land reclamation / coastal development (both overseas and in Australia), climate change, invasive species and human disturbance.

Sanderling are a small <100g northern hemisphere migratory shorebird that breed in the high Arctic north of 63⁰ latitude. The EAAF population migrates to Australia and New Zealand to spend the Austral summer and numbers approximately 30,000 individuals. While in Australia, Sanderling are confined to high energy ocean beaches and their diet consists of a diverse array of invertebrate taxa.

Participants at a shorebird expert and land manager workshop held in Warrnambool in June 2019 agreed that the limited knowledge on roosting and foraging behaviours of Sanderling at Discovery Bay is a barrier to effective species conservation.

This project aims to fill this knowledge gap by estimating the space use and time and energy budgets of foraging and roosting Sanderlings using Discovery Bay, (Vic/SA) as the overwintering period progresses.

In doing so, the project seeks to define roosting and foraging habitat characteristics for Sanderling at Discovery Bay, which, once complete, will allow the better prioritisation of resources to safeguard critical habitat.

Who is involved with the project?

The Sanderling Tracking Project is a coordinated effort of community groups, researchers and land managers.   Initiated through the Glenelg Estuary and Discovery Bay Ramsar Coordination Committee, the project is managed by South-west Environment Alliance with support from Friends of Shorebirds SE, Deakin University, Victorian Wader Study Group, Birdlife Australia and the Glenelg Hopkins CMA.  Funding for this community research partnership is provided by the Victorian Government’s Community Volunteering Action Fund.

How can I get involved?

Members of the community are encouraged to be part of the project by taking photos of Sanderling as they arrive at the beaches. In particular, taking good, clear images of the leg flag tags which identify birds.

Images of the birds and details of the leg flag tags can be uploaded to the Birdmark website which tracks movements of water birds around the globe. Once your image information is uploaded, you will receive feedback as to where that bird you spotted and took a photo of, was last seen and where – sometimes the other side of the world!

Alternatively, images can be sent to glenelgramsar@ghcma.vic.gov.au and a member of the team will input the data to Birdmark on your behalf.

SNAP A PHOTO OF A SANDERLING THIS SUMMER AND WIN!

Our photography competition is back for the Summer of 2022-2023! The Sanderling have begun their journey back to our beaches with the first spottings on Australian shores in October 2022.

Photos and sightings sent to GlenelgRamsar@ghcma.vic.gov.au go into the running to win a framed print of the Jimmi Buscombe original artwork, Sanderling on plantation Teak. A monthly prize is awarded to an original Sanderling photo with a readable leg-flag or best flock photo (in-flight or roosting).

Monthly winners of the prints will be contact directly and have their name and images posted on Glenelg Hopkin CMA social media and online on this website.

How can I get involved and why is it important to log leg flags?

VIDEO: View the livestream of the beach walk as part of the 2021 Victoria Nature Festival where Birdlife Australia’s Dan Lees talks about Sanderling and their journey around the world to get to our shores. WATCH THE VIDEO HERE

EXTENDED VIDEO: What is the project and why is it important?

Finding these birds is an important part of research, watch the extended video on the project, meet the people involved and see what the project is trying to achieve: